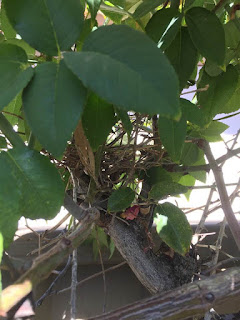 September is spring in Sydney. The flowers bloom ( if we get rain) and the birds start to nest. Its been a while since we've had one nest so close. We have had the magpies, the crows and the willy wag tails nest in the gum trees of our neighbours yard in the past, but these have been cut down now and the birds have moved to the park.

Over the last few days I have seen the turtle doves around. They have been feeding on the back lawn, walking all over the roof of the garage next door, along the fence between us and our neighbours, and fluttering in my climbing rose.

Earlier this morning I was taking some things to the bin and heard them fluttering again in the climbing rose , so I decided to investigate. Low and behold they are building their nest in amongst all the thorns! I've seen them since with more twigs, jumping from the roof of the garage onto the fence, then into the rose bush. So they have not been deterred by my finding them.

So..... I will watch this space, and try to keep my Fluffball away. She does know that they are there.

This cocoon has been in my garden since April. I've watched him move up and down my rose bush, rescued him from the green waste bin when I pruned the rose bush, and occasionally watched him as he emerged to feed.

Last Friday I spotted him at the base of the rose bush having a great adventure, looking very active and healthy. Check out my video above.

On Saturday he had climbed back into the rose bush, then the wind arrived, and on Sunday I found him upside down in the garden below. Not sure if the wind had blown him down or if he climbed down himself, I decided to let Mother Nature look after her own and leave him alone.

Yesterday, (Monday), I went to check on him and he was still on the ground at the base of the rose bush, but he had moved. The opening of his little hose was now facing up, where the day before it was facing down. When I checked for him in the  afternoon, he was gone, nowhere to be seen. I've checked again this morning and still cannot find him.

His little house his made of twigs and is very hard to spot sometimes. I just hope he is safe and just found a new branch to sleep on. 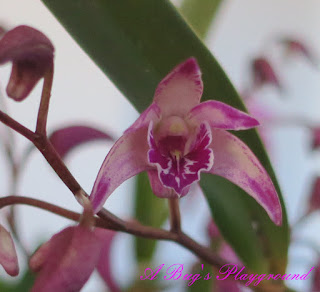 The first of my orchids is out.  I am pleased with this as it has been very dry here in Sydney.
Posted by Jenny at 9:31 AM No comments:

Email ThisBlogThis!Share to TwitterShare to FacebookShare to Pinterest
Labels: orchids 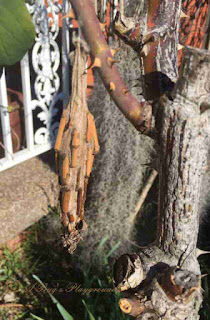 Way back in early April I found this cocoon in my garden. Over the last few months I've watched him move about the rose bush, go missing for a day or two at a time, only to re-appear again somewhere else on the rose bush.

Last weekend I decided it was time to prune my roses, and while pruning this particular one, forgot that I had a resident cocoon living in it. I was about half way through the process when I remembered, and his branch was already in the green waste bin. So I dug through the bin, found the branch with the cocoon on it, and propped it back up against what was left of the rosebush.

He stayed there for two days, then promptly disappeared again. The branch by this stage was starting to wilt.

I looked for him everywhere, on the ground, in other close by shrubs, and finally found him back on the rose bush on a pruned living branch.

I have found cocoons like this before in my garden, but have never followed their progress. It has been very interesting to find out that they move while in this transforming state. I also found it interesting that he has moved from a dying branch to a living branch. He must be getting some form of nutrient from it.

Because the rose bush has been pruned, my resident cocoon is now very exposed, and I worry that the birds or some other predator may find him. At the moment he is still there, and I will continue to watch, hopefully to see him emerge with wings. 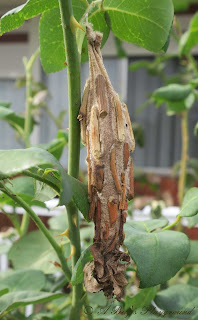 Nearly a moth ago now I found a cocoon on my front rose bush. I watched it for a while, as it moved up and down my rose bush, then onto the ground, and then to eventually disappear after two days. I looked around the rose bush, and on the ground below the rose bush, and couldn't find it, figuring Mother Nature had taken over.

On the weekend I spotted it again, this time on a totally different branch of the same rose bush. I am sure it is the same one, the mess of dead leaves at the bottom is the same.

Mother Nature is amazing. Somehow as a caterpillar still building his cocoon, he has moved around from branch to ground, then back up the branch again, and seems to have finally settled on my rosebush. Now he is back, I'll try to watch every day to see Mother Nature at work.
Posted by Jenny at 12:11 PM No comments:

Yesterday in my garden I spotted a cocoon on my rose bush. At first I thought it was just a mess of dead rose petals, but on closer inspection  I found it to be a cocoon. So I grabbed the camera and took some pics, and promised myself I would watch it daily to take note of the changes.

This morning when I went to look, it was on the move. I could see a head and little feet marching the cocoon further down the rose stem. I was hoping something beautiful was going to emerge. I already had the camera in hand, so I put it on video and pressed the button. I really need to practice my videoing skills!

I watched for a while but my cocoon settled down and closed his top ready for some more changes. So I stopped videoing and let him. be

When I downloaded the video off the camera, and saw how bad it was, I started thinking about video editing and how to do it. Mr Google came to my rescue and I have had a play of cutting some of the crap out of my video. My skills still need some work but I will keep practising.

So above is my slightly edited video of my resident cocoon on the move in my rose bush. I'll try to keep track every day. 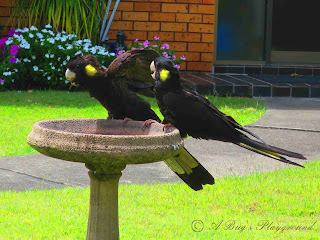 On a recent trip away to one of my favourite places, I spied these yellow tailed black cockatoos. Here they were making use of the bird bath supplied next door. They had had their drink, and were getting ready to fly.

There were only two in this pic, but at the time there were three flying around. In the past I have seen up to eight in a group in a nearby location.

We get lots of the sulphur crested cockatoos at home, but these ones are rare at home, so it was great to capture them with the lens.
Posted by Jenny at 12:22 PM No comments: 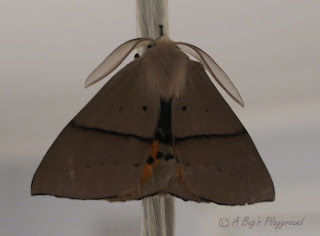 Look who came for a visit last night. I'd love to know his name but Mr Google is not much help.You will be all pleased to know he was rescued, placed outside, and happily flew away.
Posted by Jenny at 8:55 AM No comments:

Email ThisBlogThis!Share to TwitterShare to FacebookShare to Pinterest
Labels: moths 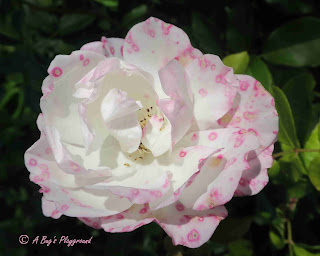 Out in my garden yesterday and I spotted this rose. Although rather pretty, it's not quite right. The rose is a white one, and always has been, until yesterday.

The white roses are planted alternately with pink ones, and two members of my family think it is cross pollination  from the bees. Me, well I think it is something else. Cross pollination can create all kinds of weird and wonderful things, but that is usually done through the seeds. My roses keep coming back each year from the same plant.

Some other responses have been 'lady bugs' ( which I know eat the aphids) , and 'fairy dust being sprinkled' which is rather a creative answer.

We have had some rain and I think it may be some kind of fungus, but I am not sure. Another thought is some kind of bug.

Whatever it is though, it has resulted in a very pretty flower, which I would like to have all the time.
Posted by Jenny at 12:14 PM No comments: 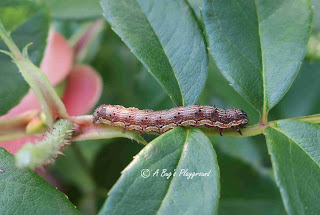 A few weeks back one of my stitching groups had a day out to see "Transformations - Art of the Scott Sisters" which is still showing at the Australian Museum. (until 25th June) The art works were of course superb, and had so much detail.

Of course I knew I had caterpillars in my garden, who doesn't? The exhibition however,  had me psychically looking for them and other tiny wildlife that may be present.

I found his little fellow on my roses. I have Googled & Googled but still do not know what he is.
Posted by Jenny at 12:17 PM No comments: